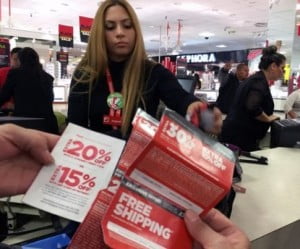 When Americans head to the cash register, they are most likely to use paper coupons verses any other method. A survey by Creditcards.com reported in USA Today shows that 63% most often use coupons delivered in the mail. Only 17% type in a discount code online, and a mere 15% use discounts saved on their phones.

Why is paper still so popular? For one, collecting and clipping coupons is a ritual that Americans have enjoyed for decades, and habits are heard to break. Other factors can come into play in which coupons provide the consumer something beyond just a deal. According to consumer psychologist, Kit Yarrow, a stack of coupons can function as the family shopping list.Consumers choose the stores they will patronize based on coupons they have on hand. Paper coupons also provide a visual reminder of a deal to be had, rather than an electronic version that can disappear from sight in a split second as a consumer scrolls and surfs.

The appeal of paper coupons cuts across all age groups. In fact, those ages 18 to 24 select paper coupons almost twice as much as any other option. As reported by Valassis, managing company of the RedPlum coupon circular, about nine in ten of millennials use coupons.

With the rise of electronic media and digital devices, it’s not to the detriment of print media.  “Ninety percent of all consumers across a variety of demographics use print and digital coupons,” said Curtis Tingle, Valassis Chief Marketing Officer. “What may be a surprise is that 83 percent of the influential millennial generation used the same or more print coupons last year in addition to their increased digital coupon use. The key for astute marketers is to develop integrated print and digital coupon strategies to optimize consumer activation.”

According to the 2016 Coupon Intelligence Report in Bloomberg:

Coupon use is not limited by income level, as even affluent shoppers ($100K+ household income) seek value when making purchases.

Coupons are a significant influence on brand loyal shoppers’ purchase decisions, impacting how they plan, where they shop and which brands they buy:

In the ever-changing world of available advertising channels — all competing for shoppers’ attention, smart marketers will incorporate a strong cross selection of options at hand in order to best target their ideal consumer base. Money Mailer of Fox River Valley offers multiple levels of direct mail advertisement through shared mail envelopes and targeted direct mail, along with digital options that include email campaigns, and mobile app and online coupon marketing.